FSI for Mumbai seafront now same as rest of city 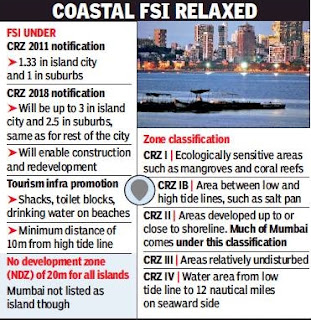 The new development norms approved by the Centre for coastal zones have erased the distinction between construction rules for Mumbai’s waterfront and inland areas.

The relaxation is expected to impact redevelopment which hinges on the sale component (surplus housing units after accounting for those meant for owners or tenants) for its viability. Besides buildings along the seafront, slum rehabilitation projects as well as gaothans and fishermen’s koliwadas may prove to be lucrative hunting grounds for developers.

But projects would still have to be cleared by the state’s coastal zone management authority, which will consider their impact on the existing infrastructure and ecology.

The move has been cheered by the construction sector.

Other experts on CRZ, though, said one needs to wait for the final notification.