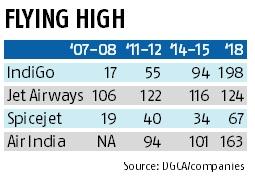 IndiGo will soon create aviation history. From a fledging airline that started 12 years ago, it is set to have 200 aircraft (currently it has 198) sometime this month, becoming the only Indian carrier to reach this milestone.

Its roller coaster ride is evident from the fact that in the low-cost carrier category it has beaten its nearest rival, SpiceJet, though the latter started operations a year earlier. SpiceJet’s fleet size is a third of that of IndiGo.

And what is ironical is that its leading promoter, Rahul Bhatia, nearly became a co-owner of SpiceJet, but the deal fell through because he asked for a majority stake.

In the global arena too, IndiGo is making waves. Based on the data of Statista for 2017, it is the seventh-biggest global LCC in terms of revenue and net profit, behind the likes of South West Airlines, Jet Blue, and Ryan Air. And based on the Skytrax ranking for 2018, it is number two among the best LCCs in Asia, behind rival AirAsia.

In terms of fleet size, however, it is still way behind many global LCCs. South West Airlines, the biggest of them all, has more than 746 planes, Ryanair over 445 planes and Jet Blue, with 252, too is much ahead in the race, according to the data from planespotters.net. But IndiGo has more planes than global LCCs like Easyjet (159) or Norwegian (159) though they both have higher revenues. The AirAsia group, which has many operations and is its key competitor in the LCC space in Asia, specifically in India, has 256 aircraft. Analysts say IndiGo did a couple of things right while other competing airlines didn’t. It decided from the beginning to place large orders for aircraft upfront and was able to negotiate attractive discounts on the sticker price from Airbus because of the large volumes. They then sold the machines at a premium to leasing companies and booked an upfront profit, and took the same aircraft back on lease.

A senior executive of a consultancy firm which has worked with it said: “They were tough negotiators and were never in a hurry like other Indian carriers to close the deal until the manufacturers brought the price down. That paid huge dividends. They did the same for spare parts as well as maintenance deals. So their costs were lower than competition.”

IndiGo executives say they followed the sale and lease-back strategy because they believed technology for aircraft would change and become much more fuel-efficient, so there was no point getting saddled with old planes. That is why they maintained the average age of the aircraft at under six years. But senior executives point out with the Airbus 320 neos in play (they are far more fuel-efficient), they do not think that technology will change dramatically in the next 20 years, so now they are planning to move to acquiring at least a few aircraft every year.

Chart Aviation experts say IndiGo understood consumer preferences well. It concentrated on on-time performance and offered customers a lot of frequencies between two destinations. Unlike other competitors which opened up new destinations and expanded quickly, IndiGo was different — it would open a new station only if it could put in at least four or five flights. That is reflected in the fact that currently IndiGo flies to only 42 destinations in the country while SpiceJet goes to 49 destinations with one-third the fleet.

A year ago top IndiGo executives said they are looking at a fleet of 350 in the next five years-and that now looks like a reality. But many airlines say the increase in capacity by LCCs is a key reason why they are not being able to hike air fares.