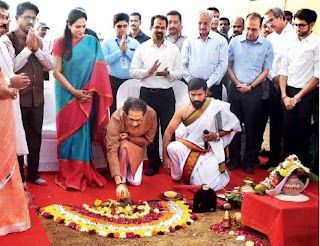 The differences between the ruling BJP and the Sena in the state again came to the fore when the BJP boycotted the bhoomi pujan, or ground-breaking ceremony, of the Rs.12,721-crore coastal road between Princess Street and Worli.

The BJP decided to boycott the function because Chief Minister Devendra Fadnavis wasn’t invited. The foundation stone of the project, which will be constructed by the BMC, was laid by Sena chief Uddhav Thackeray.

It was reliably learnt that the BMC had invited local BJP MLA Mangalprabhat Lodha to attend the function, but Lodha gave it a miss on the instructions of the party high command.

Sources said the Sena had decided not to invite Fadnavis in retaliation for Thackeray not being sent a formal invitation for the Kalyan-Bhiwandi-Thane Metro’s foundation-stone-laying ceremony. Prime Minister Narendra Modi is expected to lay the foundation stone of the Metro line on Tuesday.

However, Thackeray tried to play down the differences between the parties on the issue, and thanked both the central and state governments for giving speedy clearances to the project.

He also assured Mumbaikars that there would be no toll, nor would any other tax be imposed for using the Princess Street-to-Worli arm — a 9.98-km stretch expected to be completed within four years — of the 35.2-km long road along the city’s western coast, connecting south Mumbai to the northern suburb of Kandivali.

Bandra and Worli are already connected by sea link, and the Maharashtra State Road Development Corporation will construct another sea link connecting Bandra to Versova at a cost of Rs.11,000 crore. However, no decision has been taken yet on which agency will construct the Versova-Kandivali stretch.