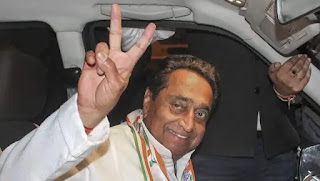 After daylong deliberations, Congress chief Rahul Gandhi took to Twitter late on Thursday evening and tweeted a picture with Kamal Nath and Jyotiraditya Scindia — the two contenders for the chief minister’s post in MP — and quoted Leo Tolstoy. “The two most powerful warriors are patience and time.”

The indication was loud and clear: Scindia will have to show “patience” while it is Nath’s “time” to take charge.

Moments later, Scindia, who spent a good part of the day at Rahul’s 12, Tughlaq Lane residence, tweeted the same picture with the caption: “It is not a race, it is not about kursi, we are here to serve the people of Madhya Pradesh. I am leaving for Bhopal and you will get to know the decision today.”

He flew out of Delhi along with Nath to meet the elected party MLAs and workers waiting at the Bhopal party office. Posters and banners were already out in Bhopal, hailing Nath as the chief minister. In Bhopal a meeting of the Congress legislature party is slated around 10 pm, where the announcement will be made.

All throughout the day, state observers and in-charges of MP, Rajasthan and Chhattisgarh kept shuttling in and out of Rahul’s residence. Former Congress chief Sonia Gandhi and Rahul’s sister Priyanka Gandhi Vadra also arrived at his residence and weighed in on the decisions.

While the discontent among the contenders who lost out in the race will come up as a big hurdle ahead of 2019, the immediate challenge at hand is to contain the unrest in the state units. Supporters of Scindia kept egging him on to fight for the top job and continued building pressure on the party high command by incessant sloganeering in his favour.