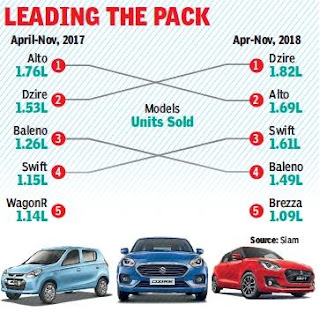 Indian car buyers are upgrading, and Maruti’s Alto — the country’s largest selling hatchback — is no more the Number 1 seller. Bigger sibling Dzire has emerged as the top-seller in April-November 2018, riding on growing aspirations of Indians for a car-with-the boot and a new design.

While Alto sold 1.69 lakh units in first eight months of the current financial year, Dzire surged ahead with 1.82 lakh units. For Alto, numbers declined by 4%, but higher-priced Dzire saw volumes go up by 19%.

The change indicates desire of Indians for a better status symbol, say market watchers. It also shows growing fatigue that has set in for Alto, one of the most-prominent cars after (now phased out) Maruti 800. While Dzire has been upgraded, a fresh version of Alto is in the works and may see a new life only next year.

More features in relatively bigger vehicles, and their growing affordability, are attracting a lot of buyers.

Maruti will not be very worried at the outcome as its models command a major share in the top-selling passenger vehicle segment in the country. Other models to break into the fat-volume brigade are from Hyundai (not in the top 5), though the gap between rivals is large.

Hyundai’s premium hatchback Elite i20 sold 92,817 units in April-November to be the seventh best-selling passenger vehicle model. It was in the eighth position in the year-ago period, clocking 89,988 units.

WagonR, yet another model from Maruti, is in the sixth position with 1.07 lakh units, down from fifth last year when it registered sales of 1.14 lakh units.

Hyundai’s compact car Grand i10 is at the eight position this year, posting sales of 88,016 units, down from sixth position in the same period last year when it clocked 1.03 lakh units. Hyundai’s SUV Creta sold 84,701 units, retaining the ninth spot. It had sold 71,808 units in the year-ago period.

Completing the top-10 best-selling passenger vehicle model is Maruti’s compact car Celerio with 70,079 units. It was at the same rank in the year-ago period with 66,682 units.