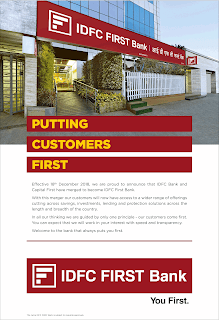 IDFC Bank and Capital First announced the completion of their merger following all requisite approvals to form a combined entity called IDFC First Bank with a loan book of ₹1.02 lakh crore.

The merged entity will serve 7.2 million customers through its 203 bank branches, 129 ATMs and 454 rural business correspondent centres across urban and rural geographies. IDFC First Bank will now offer retail and wholesale banking products to a greater number of customer segments.

The merger was announced on January 13, 2018, and as per the terms of the merger agreement, shareholders will receive 139 shares of IDFC Bank for every 10 shares held of Capital First. IDFC, which started banking operation on October 1, 2015, had been focusing on increasing its retail portfolio. IDFC Bank shares rose 4.71% to ₹41 while Capital First jumped 5.13% on the Bombay Stock Exchange.

On a combined basis, IDFC First Bank has on-book loan assets of ₹1,02,683 crore, as per the last reported financial results for the quarter ended September 30, 2018. The retail loan book will now contribute 32.46% to the overall loan book.