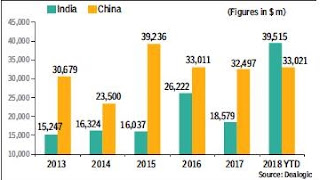 For the first time in years, annual FDI into India has been more than that in China in 2018.

Riding on mega deals by Walmart’s buyout of homegrown online retail market place Flipkart, along with acquisitions by Unilever and Schneider Electric, the year that will end soon has recorded inbound M&A deals worth $39.5 billion in India, compared to $33 billion in China, data from Dealogic showed. Interestingly, in 2017, China’s inbound M&A deals aggregated at $32.5 billion, which was almost 80% more than India’s $18.6 billion.

For India, relatively stable economic fundamentals with low inflation rate, strict management of fiscal deficits and introduction of a bankruptcy code boosted the country as an investment destination among global investors. On the other hand, for China, the ensuing trade war with the US is keeping foreign investors on the back foot, market players said.