Economists call for enhancing tax base 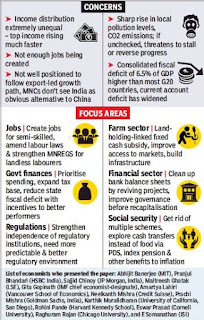 A group of top economists have advocated against squeezing of expenditure and called for enhancing the tax base, while ensuring that states undertake fiscal reforms, with a view to reduce consolidated deficit from 6.5% of GDP, which is among the highest in G20.

“Don’t squeeze spending because capital expenditure gets hit... raise the tax base. The GST is a good possibility for transformative change,” said Amartya Lahiri, who teaches at the Vancouver School of Economics, while releasing an agenda for reforms that has been prepared by a group of 13 economists.

The economists said states should be encouraged to undertake fiscal consolidation as they were lagging, despite steps taken by the Centre, and called for a need to re-prioritise expenditure. “The economy has made significant progress in combating inflation in recent years. Over the last four years, inflation has averaged just over 4% versus almost 10% in the previous five years, and household inflation expectations are getting progressively anchored. The same, however, cannot be said of the fiscal side,” the paper said.

This is a unique initiative taken by economists led by former RBI governor Raghuram Rajan and IMF chief economist-designate Gita Gopinath and comes four months ahead of general elections. Rajan said the points raised in the note could be debated during the campaign for next general elections to ensure that right policies across sectors are adopted.

He also said privatisation of public sector banks was not a panacea for all ills and made a case for reduction of uncompensated mandates, such as lending targets and pushing government schemes through branches of state-owned lenders.

The economists also suggested that there was a need to reduce the statutory liquidity ratio and substituting this with the liquidity coverage ratios and net stable funding ratios set by Basel.

Rajan also expressed concerns over uncompensated government mandates being imposed on PSBs for a long time. “This is lazy government — if an action is worth doing, it should be paid for out of budgetary resources. It is also against the interests of minority PSB shareholders.”