Bharatmala 2.0 will focus on expressways 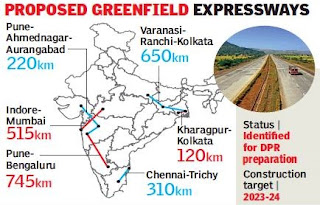 The next phase of highway development in India will focus on building expressways which allow uninterrupted traffic flow. Under the second phase of Bharatmala, the government has proposed to build nearly 3,000 km of expressways, including Indore-Mumbai, Varanasi-Ranchi-Kolkata, Bengaluru-Pune and Chennai-Trichy.

The National Highways Authority of India, which has been tasked with implementing the flagship programme, has invited bids for undertaking project preparation so that projects are ready as soon as the work for the first phase are bid out. “It took us about two years to prepare detailed project reports for phase one of Bharatmala. Undertaking DPR preparation for the next lot of projects will help save time. The focus is on preparing high quality detailed reports for faster execution,” a highway ministry official said.

Poor DPRs have been one of the reasons behind delay in execution of highway projects and the government often ends up incorporating supplementary works, which pushes the cost.

Barring a couple of identified stretches, all others will have greenfield alignment, which means these will be new roads. This is aimed at reducing distance and travel time as well. The government has notified higher speed limit for cars at a maximum of 120 kmph on expressways. Till now, highway construction has largely seen expansion and widening of existing roads.

Considering that forest and wildlife clearances hold up projects for years, the NHAI has asked the consultants to avoid road alignments through national parks and wildlife sanctuaries, “even if it requires taking a longer route/ bypass”.