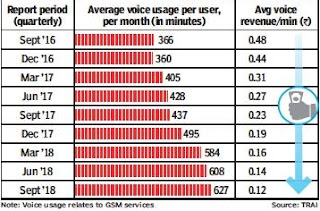 At a time when users worldwide are getting on the data bandwagon and ditching voice calls for services such as WhatsApp, Indians continue their strong bond with phone calls.

Voice calls have seen a spike of almost 70% in the past two years, according to telecom regulator Trai’s data. The average time spent on voice calls by a subscriber each month has increased steadily the quarter ended September 2016 to the September 2018 quarter. Interestingly, consumers seem to be chatting away at the expense of the telecom operators. The average revenue each minute for telcos from voice calls has dipped in the same period.

Industry watchers say a combination of cost-effectiveness and the Indian penchant for verbal communication has resulted in voice calls holding their ground in the country amid dwindling relevance globally. Further, with data itself not as strong and flawless as is needed for VoIP (Voice over Internet Protocol) calls, smartphone owners say they often rely on regular calls for a better experience.

With over 500 million feature phones in the Indian market, we cannot write off voice services in India yet. The feature phone market is also growing. According to IDC, vendors in India shipped a total of 56 million feature phones in the fourth quarter of 2017, making it “the highest-ever shipments” in a single quarter, at a time when smartphone sales itself have been either flat or declining. Research firm Counterpoint notes that India accounted for almost 43% of the global feature phone shipments in the quarter on the back of devices by Reliance Industries’ Jio.

The socio-economic situation in India is also driving preference for voice calls. A recent survey by Pew Research Centre found that, despite the push for digital, only 25% of Indian adults use the internet or own a smartphone, compared with 96% in South Korea and 89% in the US.

On the flip side, observers believe low prices of voice calls are also contributing to poor quality of call services and the infamous call drops.