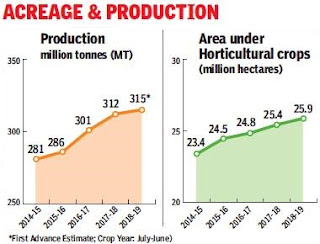 India’s bumper horticulture harvest keeps getting bigger with this year’s production expected to touch a new record of 314.67 million tonnes, nearly 1% higher than last year and 8% higher than the five-year average.

Advance estimates released by the agriculture ministry show that overall production of horticultural produce (fruits, vegetables, spices and flowers) in the 2018-19 crop year (July-June) will be better than the 311.7 MT recorded last year.

The glut, however, is also a cause for worry with observers and farm experts questioning whether farmers would actually reap the benefits of such bumper output. High production depresses prices and farmers are left in the lurch.

Production of high-focus TOP (tomato, onion and potato) is estimated to be higher than the output of these crops in 2017-18 with potato at 52.58 MT recording 6% growth, followed by tomato (2% higher) and onion (1.5% higher).

Records show that horticulture production has been consistently rising since 2012-13.