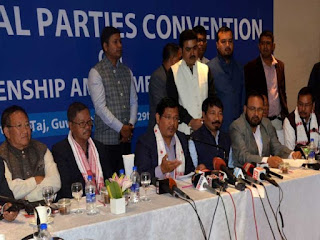 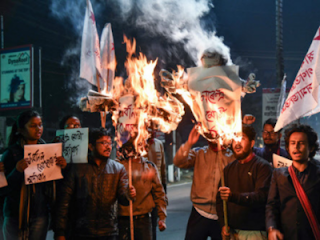 In a grand show of unity against the Citizenship (Amendment) Bill, 10 northeast-based parties, seven of whom are BJP allies, and JD(U), an NDA constituent at the national level, came together to jointly fight against the Bill “within and outside” the Parliament.

Of the remaining three, Asom Gana Parishad and Naga People’s Front were earlier part of the NDA while Khun Hynniewtrep National Awakening Movement has some influence in NDA-ruled Meghalaya.

At the meeting organized here by AGP and NPF, the parties said they would see that the Centre’s attempt to amend the Citizenship Act is defeated in Rajya Sabha. The Lok Sabha has already cleared the bill that proposes to offer citizenship to non-Muslims from Bangladesh, Pakistan and Afghanistan on grounds of religious persecution. The NDA constituents that attended the meeting included Mizo National Front from Mizoram, NPP, United Democratic Party, Hill State People’s Democratic Party and People’s Democratic Front from Meghalaya, Nationalist Democratic Progressive Party from Nagaland, and Indigenous People’s Front of Tripura.

Meghalaya chief minister Conrad Sangma, whose cabinet was the first one to oppose the bill.