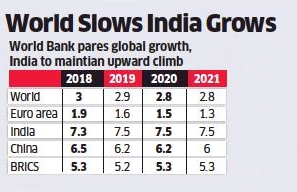 India is set to grow at a faster pace over the next three years even as “storm clouds” gather over the global economy, the World Bank said, while warning about softened international trade and investment with trade tensions remaining elevated.

India’s economic growth is forecast to accelerate to 7.5% in each of the next three financial years (fiscal 2020-22), from 7.3% in the current year, riding an upswing in consumption and a pickup in investments, as the effects of demonetisation and goods and services tax rollout wane, the World Bank said. This is unchanged from the June 2018 forecast.

It warned of escalation in simmering trade disputes and said more frequent weather events raised the possibility of large swings in food prices.

India’s growth has accelerated because of strengthening domestic consumption, as the benefits of structural reforms such as GST harmonisation and bank recapitalisation take effect.

Official statistics released by the government showed the Indian economy is likely to grow 7.2% in FY19, almost in line with 7.3% estimated by the World Bank and up from 6.7% last year.

Going ahead, “private consumption is projected to remain robust and investment growth is expected to continue as the benefits of recent policy reforms begin to materialise and credit rebounds”, it said. Strong domestic demand is likely to widen the current account deficit to 2.6% of GDP next year, while inflation is forecast at the midpoint of the Reserve Bank of India’s target range of 2-6%.