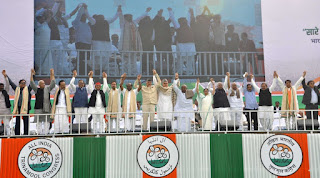 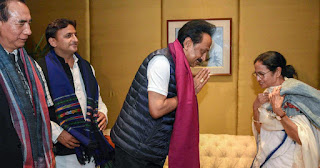 Leaders of at least 22 non-NDA parties came together in the heart of Kolkata to give shape to what some of them called “a rainbow alliance” and kick off the Lok Sabha election campaign with the single agenda of creating a “BJP-free Bharat” in the New Year.

The mega rally, hosted by Trinamool Congress supremo and West Bengal Chief Minister Mamata Banerjee at Brigade Parade ground, turned out to be a unique show of opposition strength aimed at sending a strong message to the ruling BJP and Prime Minister Narendra Modi.

Though Congress chief Rahul Gandhi was absent, he sent senior Parliamentarian Mallikarjun Kharge and Abhishek Manu Singhvi to fill in for him. Rahul’s mother and UPA chairperson Sonia Gandhi, who is said to have cordial ties with Mamata, sent a letter that was read by Kharge at the rally. The United Opposition, as the leaders called the joint front, virtually put the Modi government at the Centre on notice with the slogan “New Year, new Prime Minister”.

While Mamata declared that “the BJP government has crossed its expiry date,” the leaders even agreed to hold a victory rally at Brigade ground itself after winning the Lok Sabha polls.

Chalking out their poll strategy for the coming Lok Sabha polls, the party leaders said that they would largely go with the “one-against-one” formula, wherein one joint opposition candidate will be pitched against the BJP nominee. The idea is Mamata’s brainchild. Arun Shourie said, ‘The alliance should go by 1:1 formula — one opposition against one BJP. People’s trust in Narendra Modi and Amit Shah has eroded. Stick together with a sense of sacrifice for the country.”

He suggested that the alliance should go to every region and organize rallies. “Bengal Sherni Mamata has started this. Now you have to go everywhere to gain people’s trust. Then only you will be successful.”

Farooq Abdullah, Arun Shourie and Yashwant Sinha stressed on the need to rise above individualistic interest for the sake of the country. Sinha said, “Why are we here? We are here to remove the Narendra Modi government. We are not against a person, but we are against a way of thinking.”

On the proposed alliance’s PM’s face, Mamata said, “There may be dearth of leaders in the BJP but in our opposition alliance, everyone is a leader and a worker. Do not think about Prime Minister now. Now the question does not arise.”

In a further bid to give a defined shape to the Mahagathbandhan, N Chandrababu Naidu has called the next meeting in Amravati. Arvind Kejriwal announced that New Delhi will be the venue of the third meeting.

The leaders also spoke about coming up with a joint manifesto.

HD Deve Gowda said, “I appeal to all the leaders to prepare our manifesto for the new government. There should not be any differences. I was PM for a very short duration, so win confidence of people so that you can complete five years.”

DMK supremo MK Stalin added, “If we stay united, BJP will be defeated. We will consider this to be the second freedom fight that has started from the land of Bengal.”

Former UP CM Akhilesh Yadav urged the people of Bengal “not to fall in the trap of BJP and vote for them.”

In their speeches, most of the leaders slammed demonetisation and GST and how these economic measures affected the lives of common people.

After the brigade rally, the leaders assembled for tea and formed a committee that will take up the alleged EVM tampering issue.