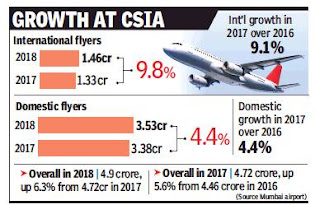 While DGCA is yet to issue India’s full year domestic and international flyers data for 2018, these two mega hubs accounted for almost 60% of the estimated 20 crore flyers who took to the skies in the country last year. At CSIA, international traffic grew at more than double the rate of domestic flyers. With its two cross runways, CSIA is for all practical purposes a single runway airport and is operating at capacity. Only a handful of slots are free here mostly at late night which are suitable for international operations. As a result, the airport is witnessing a much higher growth of international passengers than domestic ones.

In 2018, CSIA saw 1.46 crore international flyers—up 9.8% from 1.33 crore in previous year. In contrast, 3.53 crore domestic travellers flew through CSIA in 2018, up 4.4% from 3.38 crore in the previous year. CSIA is the world’s busiest single runway airport and Mumbai’s aerial connectivity will now grow only when it gets the Navi Mumbai airport in about four to five years. “We are in the process of making several developments with regard to the infrastructure to accommodate more passengers,” said a spokesperson of Mumbai airport, which saw exactly 4,98,83,388 travellers fly in and out last year.