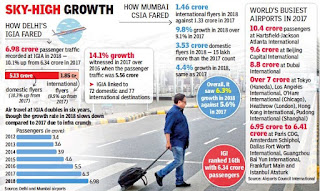 The capital’s Indira Gandhi International Airport saw its passenger handling double in just six years as it catered to almost 7 crore flyers in 2018. In 2012, the count was 3.4 crore.

However, the growth rate is slowing down as infrastructural constraints are limiting the number of flights and passengers its three runways and as many terminals can handle. In 2018, 6.98 crore passengers used IGIA, 10.1% more than 2017 when the count was 6.34 crore. The growth in 2017 was a more robust 14% against 5.56 crore flyers in 2016.

Mumbai’s Chhatrapati Shivaji Maharaj International Airport saw nearly 5 crore passengers in 2018, up 6.3% from 2017 with the international traffic growing at more than double the rate of domestic flyers at this hub operating at peak capacity. While Directorate General of Civil Aviation is yet to issue the annual domestic and international flyers’ data for 2018, these two mega hubs accounted for almost 60% of the estimated 20 crore flyers across India.

According to Airports Council International, the global representative of airports across the world, IGIA was the world’s 16th busiest airport in 2017. While the comparative data for 2018 is not yet out, Delhi is likely to climb at least a couple of places in 2018.

The sprawling IGIA, which has acres of free space, has been growing slower than its potential as it does not have any free slot or terminal capacity to handle more traffic. The three runways and as many terminals — T1, T2 and T3 — are operating at capacity. The fourth runway and a bigger T1 are supposed to be ready in three to four years and in the next phase, T2 will make way for a bigger T3. Till the fourth runway comes up, IGIA will see marginal phase-wise increase in capacity.

With its two cross runways, Mumbai’s CSIA is actually a single-runway airport. Only a handful of slots are free, mostly at late night, which are suitable for international operations. As a result, the airport is witnessing a much higher growth of international passengers than domestic ones. This trend was observed in 2017 also over 2016.

CSIA is the world’s busiest single-runway airport and Mumbai’s aerial connectivity will now grow only when it gets the much-awaited Navi Mumbai airport in about four-five years.

“India may have been the world’s fastest growing aviation market globally in the last four-five years but the airport infra has not kept pace with the exploding traffic. Hovering in Delhi and Mumbai is common,” said a senior pilot.