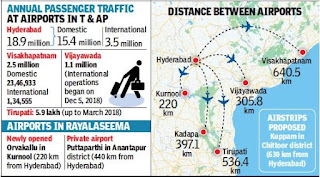 “Rayalaseema region endowed with valuable minerals and other natural resources would be transformed as the most preferred destination for industries and economic development with the new airport. I am confident that the Orvakal greenfield airport will act as a lifeline for Rayalaseema region by attracting global investors,” Naidu reiterated.

“Orvakal greenfield airport has been developed in a record span of just 18 months at a cost of Rs.88.5 crore in 1010 acres. We have established the new airport at Orvakal with our own funds to cherish the decade long dream of the people of this district to have an airport here. Now, the people of the district can travel to Amaravati and other parts of India at ease,” Naidu said.

The airport categorised as 3C shall be capable of handling turboprop aircraft such as ATR-72 and Bombardier Q 400, among others.

Meanwhile, Naidu also inaugurated the 1,000 megawatts ultra mega solar park in Kurnool on Tuesday. “We will establish mega solar parks in Anantapur and Kadapa districts as well and transform the state into an energy surplus state and a hub for solar power for decades to come.” Later, Naidu laid the foundation stone for a cancer research centre and super-specialty hospital to be established at Rs.120 crore. Foundation stone for three MSME industrial parks was also laid.

Naidu took part in the Janmabhoomi Maa vuru programme at Kosigi mandal in Mantralayam constituency and laid the foundation stone for Jaladhara programme aimed at facilitating drinking water across the state with an outlay of Rs.16,000 crore.

He also laid the foundation stone for rural roads infrastructure project with an outlay of Rs.3,576 crore aimed at improving road connectivity in rural areas. Naidu along with state ministers and officials distributed assets to the beneficiaries as part of Janmabhoomi Maa vuru at Kurnool.