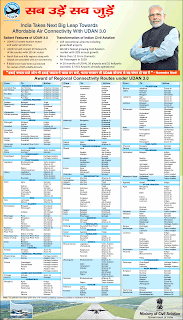 Under UDAN — announced in October 2016 — the government is offering flights to unserved and underserved parts of the country at a subsidised fare of ₹2,500 for per hour of flight. The scheme is funded by a charge on airlines and contributions from states that provide 20% of the total subsidy cost. States in the northeastern region have to pay only 10%.

Funds were required after the aviation ministry finalised the scheme’s third phase, which almost doubled the total subsidy burden to an estimated ₹1,250 crore per annum, the official cited earlier said, requesting not to be named. The aviation ministry had approached the finance ministry for help in this regard.

“The government has agreed to pay .₹400 crore from the dividend payment that Airports Authority of India makes. This should take care of our subsidy payment in the interim,” the official said. With the funding in place, the ministry will now announce the winners for routes under the third phase.

Under phase three, the government has announced international routes and seaplane operations. While the charge on airline earns ₹370 crore annually, states contribute their respective shares to the aviation ministry. For UDAN’s international scheme, Assam is contributing ₹100 crore per annum to fund flights.

In two rounds since March 2017, the ministry has awarded more than 450 domestic routes to various airlines, providing connectivity to about 35 airports across the country. Under the third phase, seaplane operations will start in Andaman and Nicobar Islands, Gujarat and Assam.