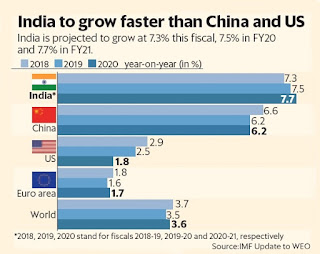 India will grow at a world beating 7.5% in 2019-20 amid slower global expansion, the International Monetary Fund said, upgrading its October forecast of 7.4%.

“India’s economy is poised to pick up in 2019, benefiting from lower oil prices and a slower pace of monetary tightening than previously expected, as inflation pressures ease,” IMF said in an update to its biannual World Economic Outlook.

The review comes even as trade tensions and a weakening Europe cast a shadow over global growth.

IMF estimates India to grow 7.3% in 2018-19 and 7.7% in 2020-21. India’s contribution to world growth has risen from 7.6% during 2000-08 to 14.5% in 2018, according to IMF.
Without naming India, IMF said that in emerging markets and developing economies, where inflation expectations are well-anchored, monetary policy could provide support to domestic activity as needed.

With retail inflation slowing to an 18-month low of 2.19% in December—though services inflation remains elevated— many analysts believe the Reserve Bank of India’s monetary policy committee will cut policy rates at its review meeting on 7 February.

In early January, crude prices were around $55 a barrel and analysts expect prices to remain broadly at that level over the next 4-5 years. Prices of metals and agricultural commodities have softened slightly since August, in part due to subdued demand from China.

IMF has projected average oil prices to stay just below $60 per barrel in 2019 and 2020 (down from about $69 and $66, respectively, in the last WEO). It has also revised price forecasts for most major agricultural commodities modestly downwards.

The multilateral lending institution said China’s economy would slow due to the combined influence of regulatory tightening and trade tensions with the US, despite fiscal stimulus that offsets some of the impact of higher US tariffs. However, IMF retained its growth projection of 6.2% for China in 2019 as well as 2020, despite growing risks.

IMF’s new chief economist, Gita Gopinath, in a statement said China’s growth slowdown could be sharper than expected, especially if trade tensions continue. “This can trigger abrupt sell-offs in financial and commodity markets as was the case in 2015-16,” she added.

Data released by the Chinese National Bureau of Statistics showed that December quarter GDP grew at the slowest pace since the global financial crisis, easing to 6.4%. That pulled full-year growth down to 6.6% in 2018, the slowest annual pace in 28 years since 1990.

Gopinath said that though downward revisions to growth forecasts are modest, IMF believes that the risks to more significant downward corrections are rising. “Overall, the cyclical forces that propelled broad-based global growth since the second half of 2017 may be weakening somewhat faster than we expected in October. While this does not mean we are staring at a major downturn, it is important to take stock of the many rising risks,” she added.

Risks to global growth tilt to the downside, with IMF cutting 2019 growth projection by 20 basis points to 3.5%.

IMF said a range of triggers beyond escalating trade tensions could spark further deterioration in risk sentiment with adverse growth implications, especially given the high levels of public and private debt. “These potential triggers include a ‘no-deal’ withdrawal of the UK from the EU and a greater-than-envisaged slowdown in China,” it added.

IMF advised that countries resolve quickly their trade disagreements rather than raising harmful barriers. “Across all economies, measures to boost potential output growth, enhance inclusiveness, and strengthen fiscal and financial buffers in an environment of high debt burdens and tighter financial conditions are imperatives,” it said.