Investments worth over Rs.4 trillion pledged at Vibrant Gujarat Summit 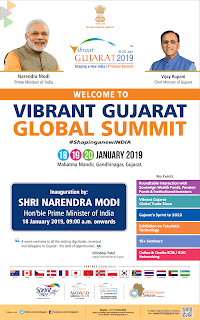 The ninth edition of the Vibrant Gujarat Global Summit has so far attracted investment commitments worth over Rs.4.62 trillion, across sectors. Of these, while Rs.4.02 trillion were made by global and Indian corporate honchos during the inaugural ceremony on Friday, the remaining came during various sectoral events held as part of the summit, which is set to conclude on Sunday.

In the two days of the biennial event so far, around 22,000 MoUs have been signed across sectors such as port and transport, Dholera special investment region, aerospace and defence, health care, agro industries, renewable energy, and micro, small and medium enterprises, among others.


Among these, the MSME sector saw a whopping 21,000 MoUs and still counting, of which Rs.3,228 crore worth of deals were signed between MSMEs and large companies for ancillary services. In terms of value, the most prominent was the MoU by China-based Tsingshan Group for an investment commitment of Rs.21,000 crore to set up a steel plant in Dholera SIR.

In the port and transport sector, Essar Group announced an intended cumulative investment of Rs.7,485 crore for the development of a port-based smart city and an LNG terminal at Hazira. The port and transport sector also investment intention being made by Adani Group for Rs.3,500 crore across three projects, including development of a captive jetty at Kori Creek, a cargo handling terminal at Mundra, and a Ro-Ro Ferry facility also at Mundra.

Another key MoU was signed by Petronet LNG with the Gujarat government for Rs.2,100 crore, for expansion of its existing LNG Port Terminal at Dahej. Similarly, HPCL Rajasthan Refinery also signed an MoU for Rs.1,400 crore for the development of a single point mooring system and crude oil terminal at Mandvi in Kutch.

Hindustan Petroleum Corporation made an investment intention of Rs.1,350 crore for LPG import facilities, along with a jetty at Dahej Port and LPG cavern and pumping facilities at Ankleshwar.

A tripartite MoU was signed between the Gujarat Maritime Board, J M Baxi & Co, and Port of Amsterdam for Rs.800 crore for the development of cruise terminals at Mandvi, Dwarka, Porbandar and Veraval.

In the aerospace and defence sector, two Rajkot-based firms signed MoUs for setting up artillery factories after mclearance from the Government of India.

In B2G, meetings were held by businesses with government departments like GIDC, environment, education, energy, renewable, petrochemical and ports.