GDP in Fast Lane Ahead of Polls 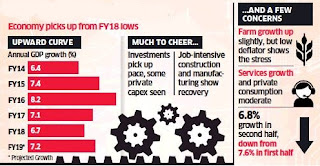 India’s economy is forecast to grow at its fastest pace in three years in FY19, recovering from the disruption caused by demonetisation and the rollout of the GST, marking the end of the government’s five-year term on a positive note ahead of the general elections. India will thus retain its ranking as the world’s fastest growing economy, the government said.

GDP is forecast to grow 7.2%, up from 6.7% last year, according to the first, full-fiscal-year estimate released by the Central Statistics Office. Gross value added growth is seen at 7% against 6.5% last year.

The growth forecast is slightly lower than 7.4% estimated by the Reserve Bank of India. The International Monetary Fund has forecast 7.3% growth in the current fiscal and 7.4% in the year after.

The slowing global economy has also contributed marginally. The decline in crude prices, the strengthening rupee and low inflation have brightened the outlook in the new year.

The higher economic growth rides on a strong recovery in investments. Gross fixed capital formation is up 12.2% in FY19 against 7.6% last fiscal.

Lacklustre private investment had been drag on the economy for a while, a gap the government had tried to fill with higher public investment. The RBI had also noted a nascent recovery in investment, though some independent experts are not convinced.

Slow agricultural growth and the resultant stress in the rural economy has become a major pre-election issue. While many state governments have announced loan waivers, the central government is not enthused and is considering some sort of income support for farmers. These measures could be announced in the upcoming budget on February 1. A sluggish agricultural sector in both nominal and real terms highlights the problem of low farm produce prices that the rural economy currently seems to be grappling with.

At current prices, GDP is seen growing 12.3% to ₹188.4 lakh crore. Per capita GDP at current prices is seen rising to ₹1.4 lakh. The forecast factors in data up to November. Data for October-December will be released on February 28 along with the second advance estimate for FY19. 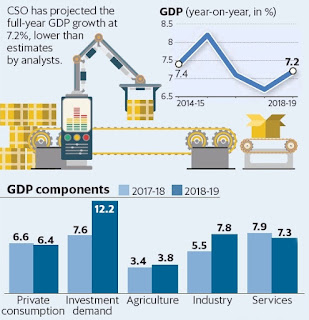