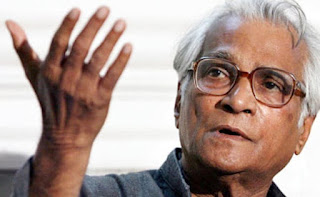 Former defence minister George Fernandes has died in Delhi. He had been ailing for the past few years. He was 88 years old.

Fernandes, who was suffering from Alzheimer’s disease, had been bed-ridden for more than eight years. He had a cold and cough and was taken to the Max Hospital in Saket by his wife, Liela Fernandes, earlier in the day, when doctors said that the veteran leader was already dead.

His son, who lives in New York, is expected back in a day or two, after which the funeral will take place.

Born on June 3, 1930, George Fernandes was, at the age of 16, sent to train as a priest, but his calling was different. He moved to Bombay in 1949 and got involved in the socialist trade union movement. Known to be a firebrand unionist and a fiery orator, he organized many strikes and bandhs there.

One strike that is remembered even now was the railways strike in 1974, where the entire nation was brought to a halt. Workers from all over the country joined the strike. It was later called off amid reports of ‘divisions’ in the union.

In 1967, he defeated Congress veteran S K Patil in parliamentary elections from the South Bombay and went on to win eight more Lok Sabha elections, last being in 2004.

Fernandes went underground during the Emergency imposed in 1975 during Prime Minister Indira Gandhi’s rule and was arrested and tried in Baroda dynamite case, where he and 24 others were charge with smuggling dynamite to blow up government establishments and railway tracks in protest against state of Emergency.

In 1977, after the Emergency was lifted, Fernandes won the Muzaffarpur seat in Bihar while in jail. The Janata Party and its allies came to power, headed by Morarji Desai, who became the first non-Congress Prime Minister of India. Fernandes was appointed as Union Minister for Industries.

During his tenure as union minister, he ordered American multinationals IBM and Coca-Cola to leave the country, due to alleged investment violations. He was the driving force behind the Konkan Railway project during his tenure as railway minister from 1989 to 1990.

He was a defence minister in the National Democratic Alliance Government (1998–2004), when the Kargil War broke out between India and Pakistan, and India conducted its nuclear tests at Pokhran.

Following Kargil war, allegations surfaced about a scam in procurment of coffins, forcing Fernandes, then defence minister, to step down in 2004 . However, two commissions of inquiry absolved him in the case.

Fernandes’ last presence in Parliament was as a Rajya Sabha member in 2009-2010.