Industrial output growth plunged to a 17-month low in November, dragged down by a contraction in manufacturing, capital and consumer goods sectors, prompting economists to say that the sharp slowdown during the month could be a blip.

The capital goods sector, which is seen as a gauge of economic activity, declined 3.4% compared with a growth of 5.7% in November 2017. A high base may also have had an impact after the sector posted strong growth as it emerged from the bruising effect of demonetisation and the rollout issues linked to the GST in November 2017.

The industrial output data, particularly the capital goods sector, has remained volatile for a significant period, prompting economists to say that the volatility makes it difficult to derive a trend.

The April-November period witnessed 5% growth compared with an expansion of 3.2% for the same period last year, which economists said was a healthy outcome. 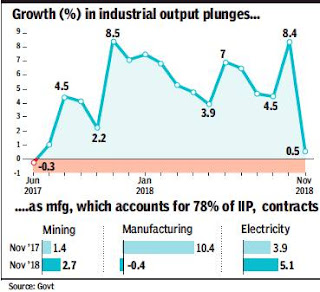