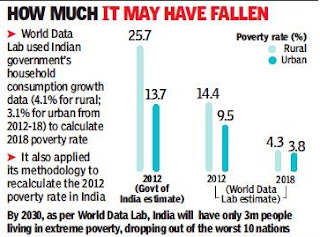 India may have reduced extreme poverty far more effectively than most of us are aware of. The last official data is eight years old. In 2011, 268 million people were surviving on less than $1.90 a day, the World Bank measure for extreme poverty. The next round of data on household consumption is likely to come out in June, and it may well show a drastic drop in the number of poor.

According to the World Data Lab — which monitors global poverty using advanced statistical models — less than 50 million Indians may be living on less than $1.90 a day now. “The soon-to-be-largest country in the world has been reducing extreme poverty fast and the world may have underestimated India’s achievements. India’s last household survey of 2017/18 (to be released in 2019) captures household consumption more comprehensively — it will include an adjustment for owner-occupied housing and measure items in accordance with common international practices,” a report by Brookings said.

Economists said that rapid economic growth and the use of technology for social sector programmes have helped make a significant dent in extreme poverty in the country. “As such there has been a decline in poverty for quite some time. Since 2004-05 there is a sustained decline in extreme poverty,” said N R Bhanumurthy, professor at National Institute of Public Finance and Policy.

He said the inclusive growth policies pursued by successive governments and the use of direct benefit transfer schemes for delivery of social sector programmes such as MNREGA, Pradhan Mantri Gram Sadak Yojana and others have made a difference. Bhanumurthy also backed calls for faster collection and processing of data for better evidence-based policy decisions.

Ex-chief statistician of India, Pronab Sen, said results of World Lab data may prove right if the share of additional resources going to the poor remain constant. “But over the last few years it has been coming down,” he said. “World Data Lab anticipates effects of these methodological adjustments will result in a level of extreme poverty in India today of 50 million people, which will come down to 40 million by 2019 end,” the Brookings report said. In June 2018, it was reported that India no more has largest number of poor.