Drive from Mumbai to Nagpur in 8 hours 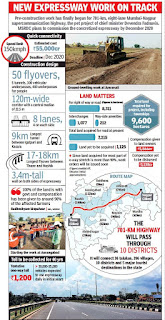 If all goes according to plan, motorists from Mumbai will be able to reach Nagpur in just eight hours by December 2020, according to the state road development corporation. At present, it is a 14-15 hour drive.

“It’s a historic moment for us. Contractors have already started pre-construction works,” said Radheshyam Mopalwar, managing director, MSRDC. Earlier, MSRDC had planned to commission the expressway by 2021. Mopalwar added: “100% of the project land is now with the government and compensation has been given to around 90% of the affected farmers.” Around 13% of land is being acquired under the Maharashtra Highways Act, 1955, the compensation disbursement process for which is ending in a few weeks, sources said.

“Men and machinery have taken over a major portion of the proposed expressway. Besides cleaning, grubbing and levelling roads, geotechnical investigations to decide the type and level of foundation are also in advanced stages. The construction plan profiles for 16 road phases are being given final touches. Site offices are being set up,” said MSRDC chief engineer Anil Gaikwad.

The project has also got the green light from the ministry of environment and forests for stretches passing through forest zones, especially towards Nashik. A formal forest clearance is expected in a few days.

Experts said it is a “realistic” deadline as land required for the mega project has been acquired. “But safety and speed control will be the major challenges ahead,” they added.

Earlier this month, around 20 banks, led by State Bank of India, called on Fadnavis and promised a Rs.2.5-lakh crore loan for Maharashtra Samruddhi Mahamarg within 30 days. State agencies have contributed another Rs.6,000 crore for the expressway project.