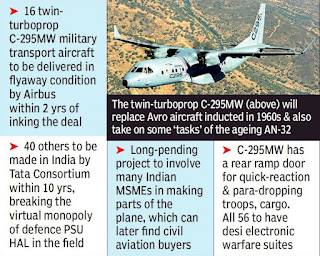 The long-pending Airbus-Tata project to build 56 C-295 transport aircraft, which will replace the old Avro-748 planes of the IAF at a cost of over Rs 21,000 crore ($3 billion), was finally cleared by the Cabinet Committee on Security.

While 16 of the twin-turboprop C-295MW aircraft will be delivered in a flyaway condition by Airbus Defence and Space (Spain) within two years of the signing of the actual contract, the rest 40 will be manufactured in India by the Tata Consortium within 10 years.

This will be the first time an Indian private sector company will manufacture a military aircraft, though with transfer of technology from a foreign firm, breaking the virtual monopoly of defence PSU Hindustan Aeronautics Ltd in the field.

The C-295 project, which has been pending for almost a decade, is not only meant to replace the Avro aircraft which were first inducted in the early-1960, the new planes will also take on some “tasks” of the ageing AN-32 fleet. A transport aircraft of 5-10 tonne capacity, the C-295MW has a rear ramp door for quick reaction and para-dropping of troops and cargo. All 56 aircraft will be installed with indigenous electronic warfare suites.

“The project will give a boost to the aerospace ecosystem in India wherein several MSMEs spread over the country will be involved in manufacturing parts of the aircraft. The aircraft can even find some buyers in the civil aviation market at a later stage,” said an official.

Before completion of deliveries, a D-level MRO (maintenance, repair and operations) facility for the C-295MW aircraft is scheduled to be set up in India. It is expected this facility will act as a regional MRO hub for various variants of C-295 aircraft,” said an official.

The Defence Acquisitions Council in May 2015, headed by the then defence minister Manohar Parrikar, had first approved the Tata-Airbus project in what was seen to be a bold move after the previous UPA regime had developed cold feet under strong pressure from the PSU lobby.

Another worry was that the Tata-Airbus project had emerged as the “single vendor” in the fray. But the government held the Tata-Airbus consortium’s technical and commercial bids had been submitted in a competitive environment, even though the other seven contenders had backed out for one reason or the other. It has taken over six years since then for the final nod by the CCS now.