Delhi ITO To Mathura Road: Glide Down Under 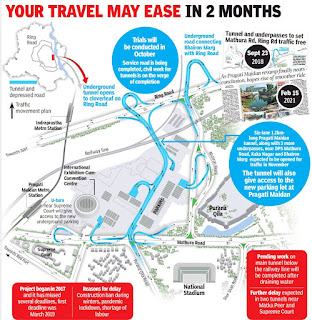 The Pragati Maidan tunnel along with three underpasses near Delhi Public School, Mathura Road, Kaka Nagar and Bhairon Marg are likely to be opened for traffic by November. Trials are expected to be held in October, a PWD official has revealed.

The completion of the Pragati Maidan corridor improvement project will allow signal-free movement on the 3.5-km stretch between ITO and DPS, Mathura Road. The PWD official said that both the underpasses being constructed near DPS and Kaka Nagar will be opened to traffic soon along with the1.2-km tunnel going below Pragati Maidan from Mathura Road to Ring Road. Work on the tunnel portion below the railway line is pending but will be completed soon, the official confided.

The corridor improvement plan, work on which began in 2017, comprises the tunnel and six underpasses. It seeks to decongest Mathura Road, Bhairon Road and Mahatma Gandhi Marg. PWD plans to operationalise four of these six tunnels by October. “The civil work is on the verge of completion, particularly on the underpasses near Matka Peer and Supreme Court. As soon as we get some respite from the rains, we will begin the final push,” the official said.

PWD will also construct a service lane along Mathura Road before the trial run. With the Ashram underpass also nearing completion, the stretch between Ashram and ITO is likely to be decongested by the year-end.

“The trials for two underpasses, the main tunnel and the Bhairon Marg tunnel will run till October-end. Atter Delhi traffic police gives its approval, the road safety audit will be carried out and the entire process is likely to be completed by November,” the PWD official said.

The centrepiece of the corridor improvement is the sixlane tunnel running below Pragati Maidan and connecting Mathura Road with Ring Road. It is expected to take the pressure off the intersections at ITO (used by up to 62,000 passenger car units daily) and Bhairon Marg (57,000 cars daily). A chunk of the eastbound traffic will use this tunnel for a quicker getaway.

With Mathura Road also becoming signal-free, peak hours will no longer look so daunting. The main beneficiaries will be commuters going to east Delhi from south and Lutyens’ Delhi via India Gate and ITO. Vehicles going to south Delhi from ITO will also have access to the tunnel from Mathura Road, a muchneeded alternative to Bhairon Marg, especially during peak hours. As a consequence, this will greatly reduce traffic at the ITO crossing.