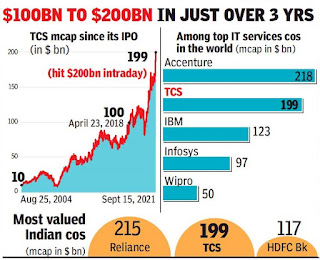 Tata Consultancy Services, the second-most valued company in India and the largest within the Tata Group, on Wednesday became the second domestic company to cross the $200-billion market capitalisation mark. Exactly a year ago, Reliance Industries was the first Indian company to cross that milestone and is currently at $215 billion.

In the global league table of most-valued software services companies, TCS now ranks behind Accenture, which has a market value of $218 billion but ahead of IBM ($123 billion).

During the day, the rally in TCS, which closed 1.8% higher, along with strong buying in Infosys, Bharti Airtel and ICICI Bank, lifted the sensex to a record close of 58,723 points, up 0.8%, or 476 points. On the NSE too, the Nifty index closed at a new life-high level of 17,519 points. The day’s rally also took total investors’ wealth to a new record high with BSE’s market capitalisation now at Rs 262.1 lakh crore, up from Rs 260 lakh crore on Tuesday.