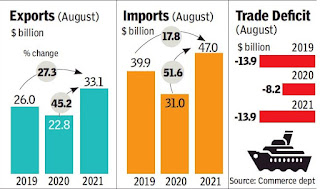 India’s exports grew to $33.1 billion in August, 45% higher than last year, but a faster pace of increase in imports resulted in trade deficit widening to $13.9 billion, the highest since April.

Although exports are nearly $2 billion lower than July, when it hit a monthly record of $35.4 billion, August’s level is line with the asking rate required to touch the target of $400 billion for the current financial year. During April-August, exports were estimated at $163.7 billion, which means that the value of monthly shipments needs to be of the order of $33.7 billion during the remaining seven months of the year.

A part of the increase in exports can be attributed to the shipments of petrol and diesel. Official data showed that non-oil exports grew 36.6% to $28.6 billion, while the export of petroleum products was up 139% to $4.6 billion in August, driven by a spike in global prices.

Oil products were the second-largest item in India’s exports basket with gems and jewellery, the third-biggest, too growing a robust 88% to $3.4 billion. Engineering goods, which had a nearly 30% share in India’s exports during the month, saw a comparatively modest 59% rise to $9.6 billion.

“With growing apprehensions related to the spread of the Delta variant, as well as logistical challenges, both oil and non-oil exports eased in August 2021 relative to the previous month,” said Aditi Nayar, chief economist at ICRA.

Among the top imports, oil shipments jumped 80% to $11.6 billion, with gold seeing an 82% rise to $6.7 billion, highest in five months. But iron and steel saw a 108% increase with total imports estimated at $1.3 billion. With commodity prices on the rise, value of shipments have seen a significant increase. Besides, freight rates have risen, raising demands from industry bodies such as FIEO to offer support.