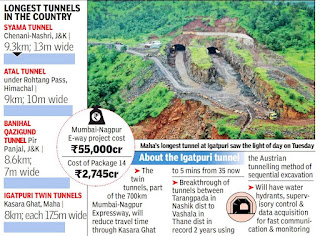 Ahead of Engineers’ Day, on Tuesday, a workforce of 1,500 workers, led by over 150 engineers, added yet another feather in Maharashtra’s cap by completing the end-to-end connectivity of India’s widest and fourth longest tunnel at Kasara Ghat near Igatpuri on the Nashik highway in a record two years.

The daylighting of the 8km twin tunnels, each 17.5mwide, will help expedite completion of the 700km Mumbai-Nagpur Super Communication Expressway that aims to reduce travel time between the two cities to 8-9 hours from 14-15 now. Even the fastest train on the route takes 11 hours.

Tunnel digging had started in September 2019. “Never in history, such a wide tunnel with 8km length has been completed in two years,” said MSRDC joint MD and PWD secretary Anil Kumar Gaikwad. Balance works include road laying and mechanical, electrical and plumbing works.

The designed driving speed of the tunnel is120km/hour and covers the gradient of 160m from near the hilltop close to Igatpuri to downhills near Vashala through the valley, said S G Paretkar, director and business unit head (hydro & underground works) for Afcons Infrastructure, which helmed the construction. Ahead of the tunnel are 60m-tall pillars to host a viaduct down the Sahyadri range, the landfall point towards Vashala. Instead of conventional vertical shafts, a low-cost inclined shaft of over 500m was built to take machinery underground to speed up digging work, a first for India, said Paretkar.

Five check dams were built to benefit villagers, said Sekhar Das, project manager for Afcons. Also a huge shed was constructed over the initial cut-and-cover tunnel portion to avoid rainwater from gushing inside.