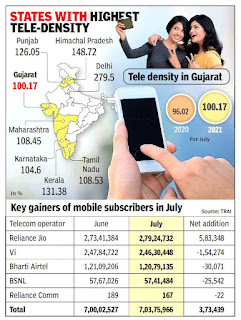 Fresh additions have increased the mobile subscriber base of Gujarat to 7.03 crore in July from around 7 crore in June, according to TRAI. Industry players have attributed the surge to the post-pandemic digital boom, online education and work from home requirements.

“There was a need for multiple mobile connections as people sought consistent mobile network and internet connectivity to ensure their remote working or their wards’ online education remained unhindered. Consequently, the overall number of subscribers grew up, pushing up the overall tele-density in the state,” a telecom industry source said.

Telecom operators also attribute the adding of new mobile connections to tariff revision and network issues. “Recently, tariff revision was announced by one of the telcos, which propelled customers to opt for newer connections. Mobile users are also plagued with poor or discrete mobile network, due to which people keep operate more than mobile numbers in a bid to stay connected at all times,” said a source.

“Post pandemic, the number of mobile subscribers dramatically increased in rural Gujarat too, besides urban areas. This was primarily fuelled post pandemic, as the need for online education and connectivity was high,” the source further added.

In July, state-owned carrier, BSNL lost some 25,542 subscribers against June. Similarly, Bharti Airtel lost some 30,071 subscribers and Vi (Vodafone Idea) lost some 1.54 lakh subscribers. The only gainer was Reliance Jio which gained some 5.83 lakh new subscribers.