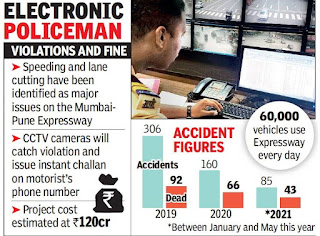 Around 250 high-end CCTV cameras will be set up along the 94km stretch of the Mumbai-Pune Expressway as part of a system to instantly issue challans to motorists for various traffic offences, said officials of the Maharashtra State Road Development Corporation recently.

An intelligent traffic management system is being developed for the Expressway, which sees frequent accidents and traffic violations.

An MSRDC official said there will be collaboration with the road transport ministry to synchronise with the Sarathi portal, which contains the details of the vehicle, including the owner and contact number. “This will allow the challan to be immediately sent to the vehicle owner’s mobile number once a camera catches a traffic violation,” said the official.

“The cameras will be of state-of-the-art quality and will be able to record the offence as well as the registration number of the vehicle in all kinds weather, be it rain or fog,” the official said.

The total cost of the project has been pegged at Rs120 crore. “Putting the system in place will take a year’s time and the tenders will be finalised soon. The project was on hold for the past two years, but funds will now be available in phases for the project,” an MSRDC official said.

Different RTOs undertook a special drive on the Expressway between July 5 and 10 this year after an accident resulted in the death of three people in the first week of June. It was found that lane-cutting and speeding accounted for the maximum offences.