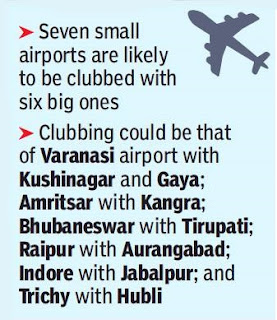 Days after the government announced its ambitious national monetisation pipeline, the Airports Authority of India board approved the privatisation of 13 more airports by early next year — six major ones and seven smaller ones that will be clubbed with the bigger ones.

Sources say the clubbing (big - small) will be Varanasi with Kushinagar and Gaya, Amritsar with Kangra, Bhubaneswar with Tirupati, Raipur with Aurangabad, Indore with Jabalpur, and Trichy with Hubli.

AAI will now begin the process of preparing bid documents so that the same can be completed by next year. The Buddhist circuit of Varanasi-Kushinagar-Gaya is likely to get significant interest from bidders due to the tourism potential of these cities, apart from Varanasi being a big destination in itself.

This is the first time that smaller airports are being clubbed with bigger ones, while opting for the PPP mode in which a private player develops and expands airports on revenue share model, while their ownership remains with the government.

The airports being developed and run PPP way so far include those at Hyderabad, Bengaluru, Delhi, Mumbai, Kochi, Ahmedabad, Lucknow and Mangaluru.