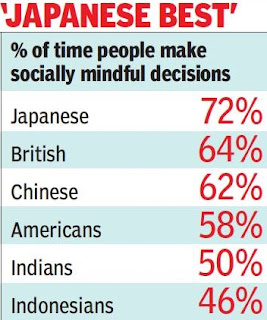 When it comes to “social mindfulness”, Japanese are the most conscious of how their actions will affect others (strangers they don’t know), while Indians are among the three nationalities at the bottom; they are least likely to show such concern even when there is no personal cost involved, a study of 31 countries has found.

While Japanese made socially mindful decisions 72% of the time, followed by Austrians (69%) and Mexicans (68%), participants in Indonesia the lowest ranked country took such decisions 46% of the time; the figure stood at 47% for Turkey and 50% for India, according to the research published in the journal, Proceedings of the National Academy of Sciences, last week.

Most research on human cooperation is based on tasks that require some real effort or investment that makes regard for others come at a cost. But what about small gestures that take no effort, such as letting someone pass on a sidewalk?

The researchers found that social mindfulness, in other words, cooperative interpersonal behaviour in which individuals consider others’ needs and perspectives, differed significantly in cross-national research.

Participants from China made considerate choices 62% of the time while the figure stood at 58% for those in the US and 64% for the United Kingdom. Canada, often touted as the “politest country in the world”, was also among the low-scoring countries at 57%.

“Many daily acts of cooperation require very little effort. Yet, most research on human cooperation has been on costly behaviour like spending time or money. Less was known about socially mindful behaviours that take hardly any effort,” first author Niels Van Doesum, assistant professor of social psychology at Leiden University, The Netherlands said.

“It’s important to not attach any value judgments to the ranking. What’s important here is that we found differences in social mindfulness at the country level which had not been studied. We are still far from explaining the differences. Further research is needed to find answers,” Van Doesum said. The researchers designed 12 hypothetical choices for 8,354 participants in the study.

The results showed significant differences between individuals and between countries.