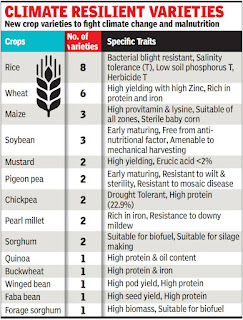 “When science, government and society work together, results are better. Such an alliance of farmers and scientists will strengthen India in dealing with new challenges,” Modi said, appealing to farmers to adopt climate resilient tech to raise their income, conserve water and save the natural ecosystem.

Releasing the new crop varieties through a virtual function attended by agriculture minister Narendra Singh Tomar and Chhattisgarh CM Bhupesh Baghel, PM Modi said, “More than 1,300 seed varieties have been developed over the years. In this series, the 35 new varieties are being dedicated to farmers. It will address the challenge of climate change and malnutrition.”

The varieties, developed by various institutions of the Indian Council of Agricultural Research, include eight new varieties of rice, six of wheat, three each of maize and soybean, two each of mustard, pigeon pea, pearl millet, sorghum and chickpea, among others. These varieties also include those that address the anti-nutritional factors found in some crops that adversely affect human and animal health.

The PM emphasised on the need to opt for both traditional and new agriculture practices. “It’s time when we have to make a balance between ‘back to basics’ (traditional farming) and ‘march for future’ (use of new technology),” he said, underlining the need to go back to the practice of ‘multi-culture’ (cultivation of different crops) farming instead of simply banking on ‘monoculture’ (single crop farming).

Modi also inaugurated the newly-constructed campus of the National Institute of Biotic Stress Tolerance, Raipur, distributed ‘Green Campus Award’ to four agricultural universities and interacted with five farmers who use innovative methods of farming. Referring to different biotic stress caused by climate change, the PM said the NIBST would conduct research on ways to address this. “We are aware of crop damage caused due to pest attacks. We had faced locust attacks last year. We took several steps to address the problem and saved farmers from incurring huge damage,” he said.