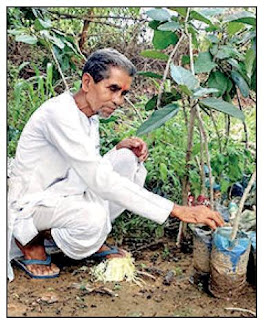 Rama Chandra Sahu is a green crusader, and how!

The thick foliage on the three roads connecting his village Kangaon in Sohela block of Bargarh district of Odisha with nearby habitations bears testimony to the now retired teacher’s mission of 36 years.

Rama Mastre, as Sahu is fondly called in his locality, has not only been planting saplings along these roadsides, but also diligently waters them every morning, until they turn tall and stout.

He fetches water from a nearby pond, filling up several containers at a time, and cycles to each of those new saplings to water them, even till this day.

Years have passed by. The saplings, now taken root as giant and lush trees, have turned the once barren village roads into undulating green swathes, stretching for miles as far as the eye can see. But, at 77 years of age, Rama Mastre’s daily routine remains unchanged.