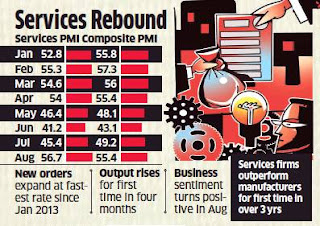 Activity in the country’s crucial services sector rebounded in August and expanded at its fastest pace in 18 months as the pandemic receded, vaccine access improved and restrictions were being lifted across the country, a survey showed on Friday. At 56.7 in August, up from 45.4 in July, the India Services Business Activity Index was above the 50.0 neutral threshold for the first time in four months.

Companies indicated that the reopening of several establishments and increased consumer footfall boosted sales, which in turn supported the first expansion in output in four months and a rebound in business confidence. The data showed that firms had ample capacity to deal with rising new orders, however, which was a factor that prevented job creation, according to the IHS Markit India Services PMI. The survey is compiled from responses to questionnaires sent to a panel of around 400 service sector companies.

The services sector had been hit hard by the pandemic as the curbs imposed to prevent the spread of the virus prompted businesses to shut down.