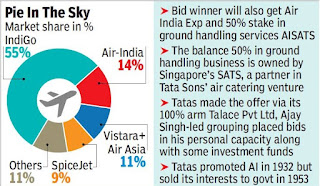 A subsidiary of Tata Sons, Talace Pvt Ltd, and SpiceJet promoter Ajay Singh have officially bid for Air India, paving the way for the government to fully exit the loss-making national carrier.

The national carrier and its subsidiary Air India Express may have together been valued in the range of ₹15,000-20,000 crore by Tata. The valuation is a rough estimate of the assets (aircraft) owned by the beleaguered airline being sold by the government.

The board of Tata Sons had given a free hand to its chairman on the bid, mentioning a price range the group would be comfortable paying for the troubled carrier. “The bid is quite within that range mentioned,” an official aware of the matter said.

The government will sell 100% stake in Air India and its low-cost subsidiary Air India Express, and 50% in ground handling company Air India SATS.

Once the government announces the winner, Tata Sons (if it is shortlisted) is expected to create one holding company for all its aviation businesses, possibly under Talace.

“Talace has just put in the bid. Future plans will keep evolving. What the group is looking at in terms of valuations is just pureplay aircraft on the books of Air India and Air India Express, especially the ones owned by them,” the persons close to the bidding process said.

Talace was incorporated in August 2020 purely to make an official bid on behalf of Tata Sons, sources said.

Directors on the board of Talace include Eruch Noshir Kapadia, Saurabh Mahesh Agrawal and Nipun Aggarwal.

SpiceJet promoter Ajay Singh has also put in a bid in his personal capacity along with two other investors.

The government has finally succeeded in getting financial bids for Air India in its second attempt, as the first in 2018 did not elicit any interest because it had planned to retain 26% stake even after privatising the national carrier.

Air India will be transferred with a debt of ₹23,000 crore, while the rest of its debt will be transferred to government-owned Air India Asset Holdings, which will house the carrier’s assets like the Air India building in Mumbai, Airlines House in Delhi, 4 acres of land in Delhi’s Connaught Place and various housing societies in Delhi, Mumbai and other cities.