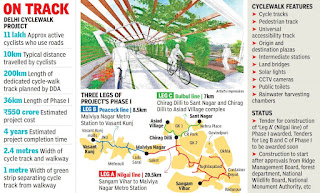 Delhi Development Authority is all set to start work on its ambitious CycleWalk project meant for pedestrians and cyclists. The tender for construction of the 20.5-km first leg of the project between Sangam Vihar and Malviya Nagar Metro Station, named Nilgai Line, has been awarded.

Delhi CycleWalk Project was conceptualised as a dedicated corridor for pedestrians and cyclists, which would loop around the city like a ring and connect Metro stations, bus stands, high density residential areas, business, industrial, recreational and educational districts and master plan greens. The plan is to make Delhi a “city of connected forests and lakes”, reduce the use of personal vehicles and allow people to walk and cycle safely to work, study, shop and stay fit.

“DDA has planned to develop about 200km of dedicated cycle-walk tracks to provide pollution-free green commuting. It was conceived to take a few million car rides out of the roads and allow people to walk and cycle safely and joyfully,” said an official.

The entire route is divided into five phases. Phase-I has an approximate length of 36km and is further divided into three legs. Work is expected to begin soon on Leg A, Nilgai Line, between Sangam Vihar and Malviya Nagar Metro Station. While the 8.5km Leg B, called Peacock Line, connects Malviya Nagar Metro Station with Vasant Kunj, the 7km Leg C, Bulbul Line, would be from Chirag Dilli to Sant Nagar. There would be a separate branch from Chirag Dilli to Asiad Games Village complex.

The origin and destination points are proposed to be interlinked with each other by cycling and walking tracks. Both on-grade and elevated tracks shall have greens all along the length to soften the edges, according to DDA.

Conceptualised in 2019, the project’s foundation stone was laid by Union home minister Amit Shah on January 6, 2020. “The tender for construction of Phase-I Leg A has been awarded. Tenders for B and C legs will be awarded in due course. The process of approval from various departments, such as Ridge Management Board, forest department, National Wildlife Board and National Monument Authority, and other stakeholders has been initiated and is at different stages. Construction will commence after all approvals are received,” the official said.

The corridor would be a safer and greener alternative to mobility, which would reduce the vehicular load in the city, provide last-mile connectivity and connect residential areas with Metro stations and bus stands. It would also allow citizens to save money on the last-mile commute, which is currently the most expensive per km charge of the journey.