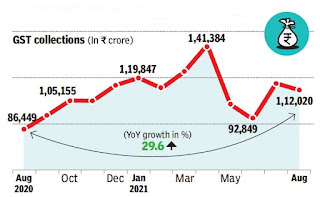 Goods and services tax collections dipped around 4% to Rs 1.12 lakh crore in August, compared to Rs 1.16 lakh crore in the previous month, but policymakers and experts remained upbeat about revenues remaining strong in the coming months on account of improved economic activity.

Last month’s mop-up, based on sales in July, was nearly 30% higher than last year when the economy had just begun to open up after a nationwide lockdown and 14% higher than the corresponding period in 2019. Barring June, when most states had imposed local lockdowns due to the second wave, the monthly GST kitty stayed above the Rs 1- lakh-crore comfort level.

The GST Council will be meeting in Lucknow on September 17, where a compensation formula for states and inverted duty structure are expected to top the agenda.

Although the drop on a sequential basis came as a surprise, most experts too shared the optimism.

M S Mani, senior director at Deloitte, said there is seasonality in GST collections as it is transaction based, which is dependent on consumer behaviour.

At a disaggregated level, barring imported goods that are subject to cess, collections went up compared to August 2019, official data showed.

Some economists, however, advised caution.