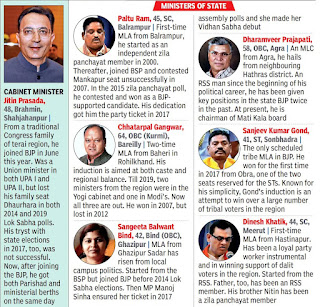 The seven new entrants to Yogi government were sworn in by Governor Anandiben Patel at Raj Bhawan on Sunday evening in the presence of Chief Minister Yogi Adityanath.

While Jitin Prasada is the only cabinet minister, the other six have been given the rank of minister of state. The appointment of Prasada, a member of Rahul Gandhi’s team before he crossed over, reflects the intent to assuage the concerns of Brahmins who are being wooed by BSP and SP.

The social profile of the newly inducted ministers is the same as it was of the seven ministers inducted in the Modi cabinet from Uttar Pradesh just over two months back, signalling the intent to consolidate communities other than Muslims, Yadavs and Jatavs who are either hostile to the party or have staunchly aligned with its rivals.

The inductions follow the party’s move to strengthen ties with the Kurmis-aligned Apna Dal and Nishad Party who represent a group of riverine communities, and giving Union HRD minister Dharmendra Pradhan, an OBC, the charge of UP elections. Both the representatives of the Dalits are Khatiks or Sonkars: Paltu Ram from Balrampur and Dinesh Khatik from Hastinapur in Western UP, a region which has a good presence of his community. Khatiks have traditionally been well-disposed towards BJP. Sanjay Gond represents STs.

The OBC nominees include Dharmveer Prajapati (Kumhar or potter), Chhatrapal Gangwar (Kurmi) and Sangeeta Balwant Bind. Binds are part of the larger Nishad category, a group of riverine communities.

An MLA from Baheri constituency, the elevation of Gangwar, a Kurmi, is being seen as a replacement for Santosh Gangwar, an MP from Bareilly, who was dropped from Modi cabinet recently. Kurmis form a sizable chunk among OBCs. The induction of Bind, a first-time MLA from Ghazipur is also being seen as BJP’s bid to create its own Nishad leadership at a time when the BJP has forged an alliance with NISHAD party led by Dr Sanjay Nishad.

Nishads have a huge presence, mostly in eastern UP.. In a way, the additions in Lucknow on Sunday mirror the inclusions in the Union council of ministers from the state earlier this year. The exercise saw PM Narendra Modi bringing in one Brahmin Ajay Mishra, three OBCs including Anupriya Patel, Pankaj Choudhary (both Kurmis), BL Verma (Lodh) and three SCs including Bhanu Pratap Singh (Kori), SP Baghel (Baghel) and Kaushal Kishor (Pasi).

With only a few months before UP polls, the BJP think tank has tried to give representation to most backwards among the OBCs in a bid to wrap up vote share as less as even 2%, a formula first time applied by former CM late Kalyan Singh and then by Union home minister Amit Shah in 2014, when he was the state in charge. “A message of social harmony and regional balance has been conveyed through the cabinet expansion. By reaching out to the last man standing, Yogi fulfilled and complied with Pandit Deendayal Ji’s philosophy,” said a senior BJP leader.