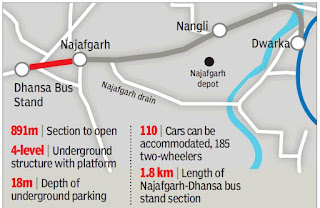 On Saturday, the much-delayed extension of the Grey Line (Dwarka-Najafgarh) to Dhansa bus stand will be put into operation, making the Delhi Metro network 390 km long with 286 metro stations.

The 891-metre section, which will take the metro further into the interior of Najafgarh, will be jointly inaugurated by Union housing and urban affairs minister Hardeep Singh Puri and chief minister Arvind Kejriwal on September 18 at12.30pm via video conferencing. Passenger services will commence at 5  pm that day.

The section was scheduled to be opened along with the ‘missing link’ of Pink Line (Majlis Park-Shiv Vihar) at Trilokpuri on August 6, but was deferred due to the restoration work on an approach road that had caved in on May 20. A large portion of the road near the under-construction Dhansa bus stand metro station had collapsed during heavy rainfall, damaging some nearby buildings.

The Dwarka-Najafgarh section of the 5.4-km Grey Line opened in 2019 with three stations at Dwarka, Nangli and Najafgarh, while work remained to be completed on the extension to Dhansa bus stand.

The station is going to be Delhi Metro’s first ever below surface station to have an entire underground floor dedicated to parking. The parking facility will be integrated with the main station area and commuters will be able to leave their vehicles and proceed directly to the concourse using the elevators and escalators.