Monsoon till August below normal, to pick up: IMD 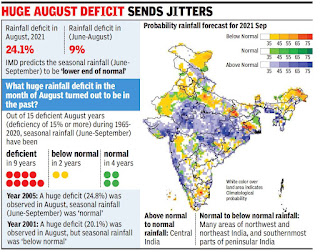 Monsoon rainfall from June 1 till August 31 has shown a deficiency of 9 per cent compared to the long period average while the monthly rainfall over the country as a whole during September 2021 is most likely to be above normal, said the Indian Meteorological Department on Wednesday.

Announcing the forecast for September over the country, IMD director general Mrutyunjay Mohapatra said the rainfall average over the country as a whole during September 2021 is most likely to be above normal, that is more than 110 per cent of the LPA.

Much of the total season’s deficit was due to the deficient rainfall in August, the IMD data showed.

The spatial distribution of probabilistic forecasts for tercile categories (above normal, normal, and below normal) for the September rainfall forecast suggests that above normal to normal rainfall is likely over many areas of central India; normal to below normal rainfall is most likely over many areas of northwest and northeast India and southernmost parts of peninsular India, he added.

Since 1901 during the monsoon season, there were 23 years when there were negative IOD conditions (Indian Ocean Dipole, a condition arising out of the difference between sea surface temperatures at different places in the Indian Ocean). Of the 23 negative IOD years, in six years (26 per cent) each, southwest monsoon saw deficient rainfall and excess rainfall category, the IMD director general said.