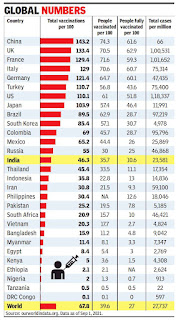 While India’s vaccination drive accelerated in August, it still has some catching-up to do in terms of total doses per 100 people. Among the 29 countries with populations of over 50 million, it ranks 14. As for percentage of population fully vaccinated, it’s at No 17. On both counts, almost all the countries with lower levels have been much less badly hit by Covid-19, with Iran and South Africa being the two exceptions.

The global vaccination average is 68.4 doses per 100 people, against 47.5 per 100 in India, the world’s leading manufacturer of vaccines. China and UK top the list along with several European countries but there are developing countries like Brazil, Colombia and Mexico that have also done better. India’s rank among the 30 countries in terms of doses per 100 people has remained unchanged since mid-June.

In terms of the number of vaccinated or fully vaccinated people per 100, 16 of these nations have done better. On this ranking, India has slid two ranks since mid-June with the Philippines and Thailand creeping ahead.

Most populous countries that are below India in vaccination coverage are also far less affected by the pandemic with very low cases per million. None have Covid vaccine manufacturing facilities supplying them with vaccines yet. The exceptions are South Africa and Iran, which have suffered more Covid cases and deaths per million than India.