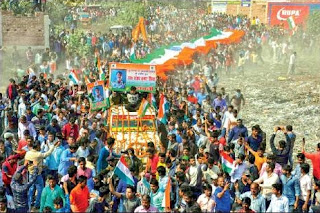 Crowded airports, mourners raising emotional slogans, tears of despair and cries for revenge. Emotions were taut as the remains of the CRPF jawans killed on duty arrived home — 40 funerals in 16 states drew people from far and wide, a nation shaken to the core at the worst terror attack in the Valley ever.

Twelve coffins arrived in UP, where in Deoria, Laxmi, widow of Vijay Maurya refused to part with her husband’s remains for last rites till CM Yogi Adityanath arrived to meet the family. The CM’s cabinet colleagues were trying to convince the family to allow the funeral till late Saturday when she finally relented.

Grief unbearable for 10-year-old Supriya who had to light the pyre of her father, CRPF jawan Pradeep Singh Yadav, at village Ajan Sukhsenpur in Kannauj, saw her fainting soon after and she had to be taken to a nearby community health centre. “The girl recovered after primary treatment and was later sent home after an hour,” said a doctor at the CHC.

Pradeep’s body wrapped in the Tricolour arrived in the village in a special truck accompanied by a senior CRPF officer and 30 jawans, senior district and police officials, local representatives and crowds.

Five-year-old Gurparkash, son of head constable Jaimal Singh in Ghalauti village in Punjab’s Moga district, helped by his grandfather Jaswant Singh and uncle Nasib Singh, lit his father’s funeral pyre. Earlier, in his mother Sukhjit Kaur’s lap, the little boy said in Hindi, “My papa might be seeing all this and us from the sky.”

In Kangra, constable Tilak Raj’s stunned widow sat by his coffin dressed as a bride; he was killed on his fourth wedding anniversary. Their second son was born just last month. The coffin was kept in a small dim-lit room of the house at Dehwa village in Jawali area of Himachal Kangra district.

Unable to understand the gravity of the situation, Tilak’s 3-year-old son broodingly played as his father’s remains were taken for the cremation.

It was a poignant moment when Savitri took off her red and gold dupatta and covered the coffin with it.

At Shikar village in Odisha’s Jagatsinghpur, there were not many eyes that remained dry as Mina, the widow of Prasanna Sahoo, crumpled to the floor when a police band sounded the bugle to mark the start of the last journey of her husband from their house to the crematorium. The funeral was attended by state officials, police and CRPF representatives. Shops and other establishments in Shikar and nearby areas were closed and locals lined both sides of the road to pay their last respects.

Hundreds of miles away, a pall of gloom descended on the 4th battalion of CRPF stationed in Rayagada district, where Sahoo was posted for anti-Maoist operations between 2013 and 2017.

In Jharkhand, Vijay Soreng was cremated in the presence of thousands of mourners and family members at his native Farsama Kumhari village in Gumla district on Saturday. Soreng’s eldest son Arun performed the last rites while his youngest son, 10-year-old Rahul, vowed to become a soldier and avenge his father’s killing. His daughters Rekha (17) and Barkha (12) were inconsolable while Soreng’s second wife, Vimla, expressed her need to be employed to support her family.

In Bengaluru, hundreds of youths accompanied the vehicle that carried the remains of H Guru on their two-wheelers. A special flight landed at HAL Airport and the coffin was taken out to an eerie silence. CM H D Kumaraswamy accepted the body on behalf of the state.