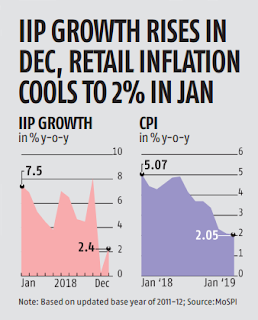 In twin reliefs for the economy, retail inflation eased to an 18-month low at the start of the new year and industrial output growth picked up in December from a 17-month low in November.

Inflation, as measured by the Consumer Price Index, cooled to 2.05% in January. The previous low for consumer inflation was 1.46% in June 2017.

The simultaneously released Index of Industrial Production was up 2.4% in December. Industrial growth was 0.3% in November, revised down from 0.5% estimated initially. The decline in inflation validates the Reserve Bank of India’s decision last week to lower the benchmark repo rate by 25 basis points, the first rate cut in 17 months.

Retail inflation has stayed below the RBI’s mediumterm target of 4% for the fifth straight month and has opened up the possibility of more rate cuts with industrial growth remaining tepid.

The six-member monetary policy committee chaired by RBI governor Shaktikanta Das had changed the stance to ‘neutral’ from ‘calibrated tightening’ in its review last week. The persistent cold weather is likely to play a key role in inflation.

A decline in food prices helped ease overall consumer inflation. Retail food prices rose 2.17% in January from a year earlier, slower than 2.65% in December. The Central Statistics Office revised the headline inflation for December to 2.11% from 2.19% earlier.

In the food category, inflation eased in vegetables, sugar and eggs, highlighting the stress in agriculture. The government had announced a ₹6,000 annual income transfer scheme for small farmers in the interim budget on February 1. Certain non-food components showed higher rates of inflation — housing was at 5.2% and paan, tobacco and intoxicants at 5.62%. Others were moderate — fuel and light inflation stood at 2.2% and that for clothing and footwear at 2.95%.

Industrial growth recovered from the lows of November on the back of a rise in manufacturing. Manufacturing, which constitutes 77.63% of the IIP, grew 2.7% in December while electricity generation was up 4.4%. Mining output fell 1%.

Consumer durables output increased 2.9%, faster than 2.1% in December last year. Capital goods registered growth of 5.9% compared with 13.2% a year earlier. There was growth in 13 of the 23 industry groups in the manufacturing sector.

In the first nine months of the current fiscal (April to December), IIP growth is higher at 4.6%, compared with 3.7% in the year earlier.

Passenger vehicle sales remained muted and declined 1.8% in January in line with the lower growth expected in the second half of the year. 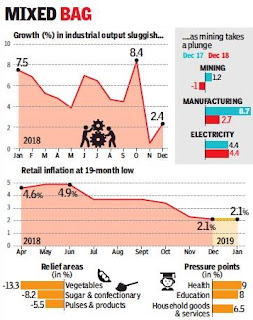