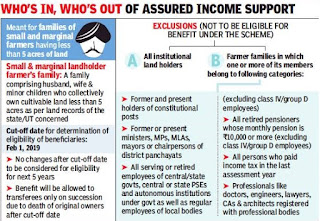 Having got an assurance from the states to get a list of beneficiaries under assured income support scheme in 15 days, the Centre launched a dedicated portal for this purpose and released detailed operational guidelines specifying exclusion of certain categories of non-eligible landholder farmer family and allocating specific roles to different agencies for implementing this ambitious programme for around 12 crores small and marginal farmers.

The states have been requested to upload details of eligible farmers on the dedicated website (http://pmkisan.nic.in) by February 25.

“Though we have time till March 31 to transfer Rs,2,000 each to bank accounts of all eligible farmers, we want to start the process of transferring the amount in February itself (may be by February 28). It will then be a ‘work in progress’ and thus won’t come under the scanner of Election Commission’s model code of conduct once polls are announced in the first week of March,” said an official.

The fully centrally funded scheme called PM-Kisan was announced by the government in its interim Budget for 2019-20 on February 1. Under the scheme, each of the country’s nearly 12 crore small and marginal landholder farmer families will get Rs.6,000 per annum in three equal instalments every four months in a financial year.

Since the government made it operational with effect from December 1, 2018, the first installment of Rs.2,000 is to be transferred to bank accounts of each of this category of farmers, who have cultivable land up to 2 hectares (little less than five acres), by March 31. The operational guidelines, however, also specify exclusions on the basis of high economic status of landholder farmers.