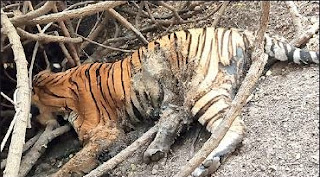 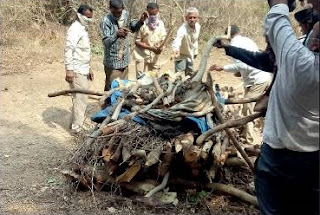 The fortnight of excitement over tiger sighting in Gujarat was short-lived as the big cat was found dead in Mahisagar’s forest area.

The tiger’s decomposed body was found near Signali around 5 pm. Vadodara chief conservator of forests S K Shrivastava said the carcass was found 12 km away from where it was spotted on camera last week. Rajeev Gupta, additional chief secretary, forests and environment, said: “As per primary information, the tiger died two or three days ago. However, all four legs and nails were in tact and there were no injury marks”. “The viscera and other body parts have been sent to the Forensic Science Laboratory to ascertain the exact cause of death,” he said.

Even though he ruled out poaching, Gupta said the department was looking into the possibility of death by poisoning. The male tiger was 5-7 years old and had crossed over to Gujarat from Madhya Pradesh. The forest department had installed trap cameras and it was last seen around 2 km from Santrampur, on February 12.