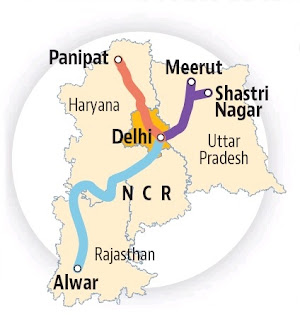 The Union Cabinet cleared the way for construction of the first rapid rail corridor in NCR connecting Delhi’s Sarai Kale Khan with Meerut by mid-2025. The government is likely to lay the foundation stone for the 82.15 km project before the poll code of conduct kicks in.

Once this Rapid Rail Transit System becomes operational, trains on the dedicated corridor can cover the entire stretch in less than an hour. The agency responsible for construction of this corridor and train operations, NCR Transport Corporation, has reworked the cost and brought it down to Rs.30,274 crore from the earlier estimate of Rs.31,902 crore project.

Joining city centre to city centre, RRTS trains will reduce pollution and road congestion taking more than one lakh private vehicles off the road. The trains will be equipped with modern features like CCTV surveillance, mobile/laptop charging points, luggage space etc. All station and trains will have universal accessibility for the specially-abled. Each train will have a business class and a ladies coach.

While the Centre will provide financial assistance of Rs.5,634 crores in the form of grant and sub-ordinate debt, both Delhi and Uttar Pradesh governments will put their share and a substantial portion of the investment will come from ADB, one of the major funding agencies for infrastructure projects.

The RRTS is a first-of-its-kind, rail-based, high-speed regional transit system to be implemented in India. The project involves integration with other urban transport systems.

The project was held up due to a tussle between the urban affairs ministry and AAP government over the issue of Delhi government’s refusal to pay its share and taking any liability in case of operational loss. As per the revised cost, Delhi needs to pay less than Rs.1,000 crore and that too in instalments.

Though the Delhi government had maintained that it won’t be able to pay the amount at a recently held inter-ministerial meeting, the project was approved. Chief minister Arvind Kejriwal had asked the Centre to bear the city government’s share. Sources said the Centre could cut down the grant it gives to Delhi to pay for its share in the project.

Sources said the project has been approved with the condition that the participating states in the project will bear the operational losses, if any, and they will also have the liability of paying the loan in case of default by the company that has been set up to build and run the trains.