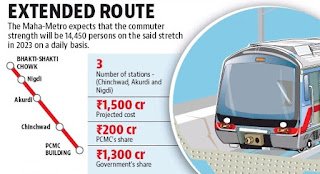 The extension of the Pune metro route corridor from Chinchwad to Nigdi has received principle approval from the Maharashtra state government.

The approval was sanctioned after Maha-Metro prepared a detailed project repor based on the demand made by Pimpri Chinchwad Municipal Corporation in December 2018.

Meanwhile, Maha-Metro is yet to file a detailed project report for the Swargate to Katraj route. The extended stretch of the Pune metro from the Pimpri Chinchwad municipal corporation headquarters to Bhakti Shakti Square in Chinchwad, is 4.41 km. According to the comprehensive mobility plan, September 2018, the stretch had been extended for the said area as demanded.

The detailed project report was approved by the PCMC administration and sent to the state government for approval.

The said corridor will have three stations: Chinchwad, Akurdi and Nigdi. Maha-Metro has estimated the commuter strength at 14,450 people on the said stretch, in 2023 on a daily basis.